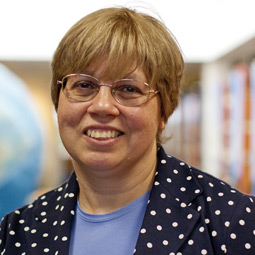 Elizabeth (Lisa) Fish has worked in academic and research libraries for thirty years.  She has a Bachelor’s degree in speech communication from Minnesota State University, Moorhead and received her Master of Library Service degree from Rutgers University in New Brunswick, New Jersey.

She joined the University of Miami in 2006 as Director at the Rosenstiel School of Marine and Atmospheric Science Library on Virginia Key.  Previously she was the Geology/Geoscience Librarian at Columbia University from 1996-2006, in charge of the Geology library on the main campus and the Geoscience library at the Lamont Doherty Earth Observatory campus.  Prior to her service at Columbia, Lisa was a Senior Reference Librarian at the Linda Hall Library in Kansas City, Missouri from 1994-1996.  While at Linda Hall, she established a fee-based literature research program to serve the library’s worldwide clientele in science and engineering.  Her career began at the New York Public Libraries’ Science Technology and Research Division (later the Science, Industry and Business Library). where she served as reference librarian and reference coordinator from 1986-1992. Lisa also had practical experience assisting scientists in field research and laboratory work in 1993-94.

Lisa is a member of the American Library Association, the Geoscience Information Society, the International Association of Aquatic & Marine Science Libraries and Information Centers, Atmospheric Science Librarians International, the American Geophysical Union, the American Meteorological Society and the Society of Scholarly Publishing.  She has served on preservation and membership committees for the Geoscience Information Society, and has spoken on digitization of maps, information services for atmospheric sciences, development of data curation services and long-term use patterns for geology publications at meetings and conferences.