Museo del Prado Spanish Painting up to 1800, Madrid, SP
The Department of Spanish Painting includes just over 2,800 Spanish paintings dating from the 12th to the early 19th centuries spanning the Romanesque, Medieval, Rennaisance and Baroque periods.

Internet Search Tips
When searching on the Internet, it is often useful to use terms in the native language of the art/artist topic, i.e. pintura sevillana, ceramica mudejar.
Films on Spanish Art
"Velázquez, El Greco, Goya and the Spanish Masters." , directed by L. Schwartz. , produced by Studio Quart. , Entertainment One Ltd, 1992. Alexander Street.
About this Guide
Note: Many of the databases and/or article links referenced in this guide require CaneID authentication through the the UM Library system unless denoted by the "open access" symbol. 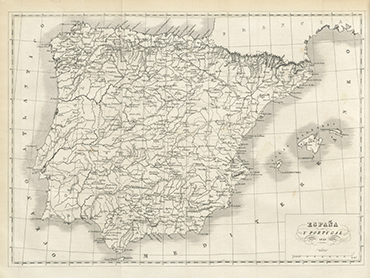 Bibliography of the History of Art (BHA) and Répertoire International de la Littérature de l'art (RILA)
Searchable together, these citation databases cover European and American visual arts material including articles from over 1,200 journals.

(available through JSTOR)
Devoted to the fine and decorative arts

Hispana
Hispana is a digital portal and aggregator of Spanish resources (archives, libraries, and museums within the collections of Europeana.

Hispanic Society Museum & Library
Founded in 1904 by Archer Milton Huntington (1870-1955) with the object of establishing a free, public museum and reference library for the study of the art and culture of the Spain, Portugal, Latin America, and the Philippines.

Hispanic Institute Columbia University, NY
A scholarly and cultural center whose aims are to disseminate research on Iberian and Latin American cultures in all their manifestations and to promote academics that showcase new contributions to Latin American and Iberian cultural production in Europe, Latin America, and the United States.

Book a Consultation
External researchers must submit their consultation request through this form.