About this Guide
Note: Many of the databases and/or article links referenced in this guide require CaneID authentication through the the UM Library system unless denoted by the "open access" symbol.

open access
Collections Online
Early Netherlandish Painting
Metropolitan Museum of Art NY
The period from about 1420 to 1550 was one of astonishing and almost uninterrupted artistic achievement in the Burgundian Netherlands (Low Countries). Taking “all-bearing nature” as their guide, early Netherlandish artists extended the boundaries of painting until they seemed as limitless.

Lowe Art Museum, University of Miami
The Lowe’s Kress Collection includes Italian and Northern European artworks from the Renaissance (ca. 1300-1600) and Baroque (ca. 1600-1700) periods. Over the years, the Lowe has added more works of Renaissance and Baroque art to its European holdings, expanding on the core gift of 41 paintings and sculpture that form the Samuel H. Kress Collection.

Tour: Renaissance Masterpieces
This self-guided short tour will take you on a journey from Italy to Northern Europe and showcases five examples of early and High Renaissance art by masters such as Leonardo, Raphael and Titian.

The museum is home to masterpieces such as the Portrait of a Musician by Leonardo da Vinci, The Basket of Fruit by Caravaggio, the cartoon for the School of Athens by Raphael, the Adoration of the Magi by Titian, the Madonna of the Pavilion by Sandro Botticelli and the magnificent Vases of Flowers by Jan Brueghel.

Städel Museum Frankfurt, Germany
Stunning digital survey of seven hundred years of European art from the early fourteenth century to the present, with focuses on the Renaissance, the Baroque and early Modern art.

Vatican Museum Masterpieces
“Principles for the Development of a Complete Mind: Study the science of art. Study the art of science. Develop your senses- especially learn how to see. Realize that everything connects to everything else.”
Leonardo da Vinci 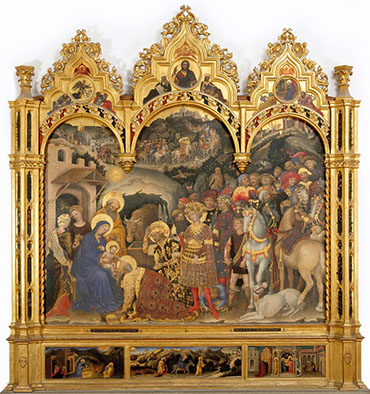 Gentile da Fabriano. Adoration of the Magi. 1423.
Uffizi Gallery, Florence
Renaissance, a French word meaning rebirth, is applied to the rediscovery and revival of interest in the art, architecture and literary culture of Antiquity which took place in Italy from the 14th century onwards, and in Northern Europe a little later. It is broadly used to describe the historical period stretching from the 15th century to the end of the 16th century. It is also applied as a stylistic label to the art of these centuries. Two main phases of the Italian Renaissance are distinguished: the Early Renaissance and the High Renaissance.
Research Portals & Archives
Europe 1300-1800
Beginner’s guide to historical overviews, artists, styles, Christianity, and more.

I Tatti: The Harvard University Center for REnaissance Studies
I Tatti is dedicated to advanced research in all aspects of the Italian Renaissance.

The Newberry Center for Renaissance Studies
The Center for Renaissance Studies promotes the use of the Newberry collection by graduate students and postgraduate scholars in the fields of late medieval, Renaissance, and early modern studies (ca. 1300 – ca. 1750), making available programs that may not be feasible for individual institutions to mount alone.
Article Indexes & Databases
Bibliography of the History of Art (BHA)

Book a Consultation
Researchers must submit their consultation request through this form.

Collections Online
The principal European style in the visual arts in the 17th century and the first half of the 18th; generally considered to be characteristic of the period of Caravaggio, Rubens, Rembrandt, Giordano & Tiepolo in painting, Bernini in sculpture, Borromini and Wren in architeture.
see Oxford Art Online 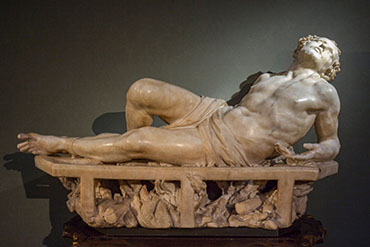