Land Acknowledgement
The following program originates from the University of Miami . . . with locations in Coral Gables, Virginia Key, and the Health District in downtown Miami.  The University of Miami Libraries acknowledges that we stand on the ancestral territory of the Tequesta and that the Seminole Tribe of Florida, the Council of the Original Miccosukee and Simanolee Nation Aboriginal Peoples, and the Miccosukee Tribe of the Indians of Florida are now its Native American custodians. This acknowledgment is one of the ways in which we work to educate ourselves about this land, its history, and our relationships with each other.
Introduction
This library research guide supports the spring 2022 exhibition From Pre-Contact to Shatter Zone and the symposium La Florida Missions: Spaces of Globalization, Resistance, and Transformation. The symposium retraces the mission activities of the Spanish in La Florida from 1565 and documents the stories of indigenous peoples in Florida.

At the time of contact with Europeans in the 16th century, the Guale, the Timucua, and the Apalachee peoples in Florida formed part of the Southeastern Ceremonial Complex, a rich Native American exchange network with identifiable motifs and sophisticated patterns of symbolic and artistic expression. This Complex flourished in the Mississippi Valley from 900 C.E. onwards and extended north and east into vast regions of the land.

For the uninvited Spaniards stationed at the garrison of St. Augustine, which was founded in 1565, “La Florida” was a harsh frontier that did not yield returns other than holding on to a strategic location. Its failure as a profitable colonial economic enterprise notwithstanding, a vigorous missionary effort was launched in the land, with the Franciscan order at its helm. Not without great toil and setbacks, the Friars Minor established mission systems that lasted more than a century and a half and extended from the Atlantic coastline to northern Florida and central Georgia. With the assistance of native-speaking intellectuals, the friars learned Timucua and set it down to writing, making it the first recorded indigenous language in the present-day United States. There are 10 extant imprints in Spanish and Timucua produced during the first three decades of the 17th century. These bilingual imprints amount to a robust body of work that tells an important story about Spanish and indigenous transcultural competence in Florida’s early modern past.

Tragically, due to epidemics, colonial exploitation by the Spaniards, and the ravages of commodified slavery introduced by the English, the missionized Guale, Apalachee, and Timucua almost disappeared as a people by 1763. And yet, their legacy as they negotiated the universalist epistemology of Christianity while keeping their indigenous identity deserves to be explored, better known, and remembered. 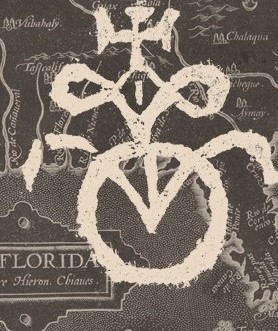 Granberry. (1993). A Grammar and Dictionary of the Timucua Language. The University of Alabama Press.

Located near Tallahassee in Leon County and flourishing between 1100 and 1400ce, Lake Jackson was an important Mississippian ceremonial center boasting mound construction, elaborate maize agriculture, and sustaining the most politically complex culture in precontact Florida. Sophisticated burial art objects such as repoussé copper breastplates, engraved shell gorgets, pendants, and hair ornaments are found in its mounds.  They show style similarities with comparable objects in major sites in the Southeastern Ceremonial Complex (SECC) network such as Spiro, Moundville, and Etowah, evincing a dynamic exchange activity, especially with Etowah.

Southwards along the Florida Gulf Coast is the Key Marco site. Its excavation by Frank Hamilton Cushing in 1896 is one of the major events in North American archaeology. Conducted in a muck pond of less than one acre of extension Cushing called “Court of Pile Dwellers,” the excavation yielded more than 1000 wooden and cord artifacts, as well as hundreds of objects in shell and bone. The artifacts were deposited anywhere from the 700’s CE to the contact period in the 1500s.

Below are examples of these objects from the exhibition “From Precontact to Shatter Zone: Exploring Florida Legacies” at Richter Library (April 7-September 30, 2022). 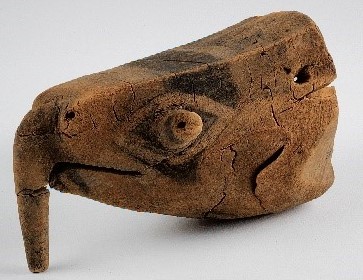 When the object was removed from the muck pond, the colors soon began to vanish. To preserve a record of designs and pigmentation, expedition artist and photographer Wells M. Sawyer painted on-site a series of watercolors of masks and figureheads before all colors and painted lines faded. This is the only extant visual documentary evidence of these aspects of the figure.

Masterfully carved in dark-colored hardwood, the best-known figure of the Key Marco site and one of the finest pre-contact Native American ceremonial art objects in North America, is only six inches tall.  It has been pointed out that the statuette is carved in the likeness of Florida panthers and that in Native American Southeast cosmography, panthers were associated with the Piasa, power beings that ruled the watery Underworld (Karen K. Russell 2012, 112).  Because the artist of the statuette was most likely a Calusa, the association of this humanoid panther-god figure with the powers of coastal waters, is plausible.

Image courtesy of the National Museum of Natural History, Department of Anthropology 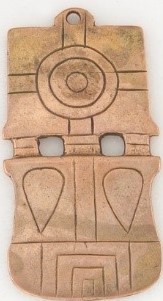 The object is made of gold, a metal not found in Florida, as the Spaniards soon found out much to their chagrin.  The metal was possibly salvaged by Florida coastal indigenous peoples from Spanish shipwrecks and then reworked into native art and ceremonial forms by the indigenous artists. Some of the incised forms are variants of the quadrata and concentric circles, but their symbolism in the context of the tablets is unknown.  These pendants or ceremonial tablets are believed to have been worn by elites. There are nearly seventy medallions or ceremonial tablets found in archaeological sites in South Florida.

Image courtesy of the National Museum of the American Indian

In 1591, the Flemish engraver Theodor de Bry published in German and in Latin the second volume of his Grand Voyages illustrated with 42 engravings about the French colonial experience in 16th century Florida.  These engravings constitute the only extant visual record of the Timucua peoples of Florida at the time of contact.

Desirous to have a foothold in Florida to challenge Spain, the French built Charlesfort in 1562, a short-lived Huguenot fort in Parris Island, South Carolina.  A second attempt was led by René Goulaine de Laudonnière in 1564, who founded Fort Caroline, near present-day Jacksonville, Florida.   Jacques Le Moyne was the cartographer and artist of this expedition, which ended in utter disaster at the hands of Pedro Menéndez de Avilés, sent by the Spanish king to clear the land from the French.  The Spaniards destroyed Fort Caroline, and shortly after massacred more than 300 French soldiers under Jean Ribaut, all of who had just arrived in Florida to support the French contingent at Fort Caroline.

Le Moyne’s narrative is one of four relations written by the French recording their interactions with the different indigenous chiefdoms in the land.  All his drawings of the Timucua have been lost except one.  Shortly after his death in 1588, De Bry supposedly bought the drawings and narrative from the widow in London and based his engravings on them.  However, contemporary Florida ethnohistorians and archaeologists have questioned the existence of Le Moyne’s drawings, and even his narrative.  They believe that De Bry may have derived many of his engravings from sketches of the Tupibambá in Brazil made by Hans Staden.   Indeed, because De Bry was never in the Americas, he borrowed from other artists’ images and narratives to invent the images for many of the engravings in his work. However dubious, De Bry’s engravings are relevant documents if only for recording how images chronicling first contacts with indigenous cultures across the Americas were framed and marketed to an avid public in early modern Europe.

Below are examples from the exhibition, “From Precontact to Shatter Zone: Exploring Florida Legacies” at Richter Library (April 7-September 30, 2022).

Mississippian Arts and Cultures
The Mississippian period dates from approximately 900 CE until the 1500s. Based on a vigorous agricultural economy in the Mississippi Valley, this period was characterized by highly complex, stratified societies with earthen mounds and ample plazas. The legitimation of elites fostered the production of sophisticated art objects circulating in a vast exchange network that extended to major sites such as Cahokia in Illinois, Spiro in Oklahoma, Moundville in Alabama, Etowah in Georgia, Lake Jackson in northwest Florida, and also touched Key Marco in the Gulf coast. Some classes of objects evincing intense trade in the Mississippian geocultural region are engraved gorgets, repoussé copper plates and headdresses, sophisticated ceramics with totemic animals, effigy platform pipes, shell masks, symbolic weaponry, stone plaques, and others. These art objects share a constellation of cosmographic motifs and themes that have been coined, not without controversy, as Southeastern Ceremonial Complex symbols (SECC).

Below are examples of these objects from the exhibition“From Precontact to Shatter Zone: Exploring Florida Legacies” at Richter Library (April 7-September 30, 2022).
Whelk Gorget 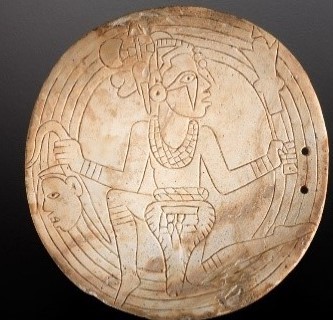 In the words of Tom Evans (Skidi Pawnee):  “This gorget depicts a young warrior dancing in imitation of the Morning Star. The severed head held in the dancer’s right hand is proof of that successful imitation….The eye pattern seen on the dancer’s face is thought to suggest the pattern found on the faces of certain hawks who symbolize swift pursuit and unerring aim in striking an enemy. 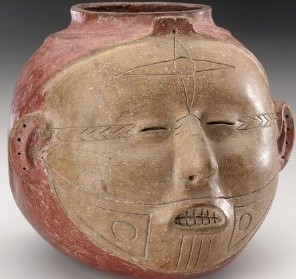 This is a fine example of a unique SECC ceramic tradition.  Believed to be a portraiture modality, head vessels represented lifeless warriors, venerated ancestors, or leaders.  The perforations in the ears suggest the possibility of adornment for ritual use. The tattoos on the face may also suggest ritual personification of a mythical being by the portrayed individual when he was alive. (Walker 2004, 227). 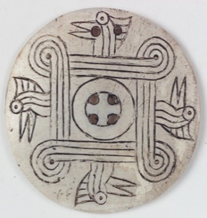 This masterfully incised gorget is believed to be a cosmogram.  The cross has been interpreted to represent the four logs feeding the sacred fire,  the circle to refer to the sun in the Above World, the looped scrolls to stand for the four corners bounding the earth-disk of the Middle World, and the crested birds, other-than-human beings, are associated with weather powers and the four cardinal directions. (Lankford 2007).

Milanich. (1995). Florida Indians and the invasion from Europe. University Press of Florida.

Loucks. (1980). Political and economic interactions between Spaniards and Indians: Archeological and ethnohistorical perspectives of the mission system in Florida.

Worth. (1995). The struggle for the Georgia coast: An 18th-century Spanish retrospective on Guale and Mocama. American Museum of Natural History.
Looking for More!!!
SPECIAL COLLECTIONS
AND
CUBAN HERITAGE COLLECTION
AND
LOWE ART MUSEUM
Online Sources
The Timucua: North Florida’s Early People
A collection of materials from the National Park Service.

Ah-Tah-Thi-Ki Museum
Home to more than 180,000 unique artifacts and archival items. Come and learn about the Seminole people and experience their rich cultural and historical ties to the Southeast and Florida, as they have made Big Cypress their home since creation.

National Museum of the American Indian
Preserves and studies the life, languages, literature, history, and arts of Native Americans.