Anna “Connie” Veltfort was born in 1945 in Germany. She is a writer and illustrator living in New York City. Most of her childhood in the 1950’s was spent in the United States, but she was brought to Cuba in 1962 at the will of her stepfather, a veteran of the Spanish Civil War, who saw himself reborn in the triumph of the Cuban Revolution. She lived in Cuba for a decade, even attending the University of Havana and performing agricultural labor alongside her university classmates in the Sierra Maestra. She came to live in Cuba at a critical moment in its history: the ultimate betrayal of the Castro regime as it strengthened its authoritarian grasp on the people, aligned with the Soviet Union, and entered the world stage at the height of the Cold War. Her time in Cuba came to profoundly shape her identity. Before she moved to Cuba, she visited her mother’s family in Hamburg in 1961 at age 16. While she was there, sent by her uncle, she visited the Berlin Wall as it was being built, adding to her complex experience of the effects of the Communist government in the 1960’s. Veltfort graduated in 1972 from the University of Havana with a degree in Art History. Her thesis focused on the 20th-century avant-garde movement in Russia, particularly an analysis of the works by filmmaker Sergei Eisenstein. Veltfort continued her education in the United States at Parsons School of Design, the School of Visual Arts, studying graphic design and illustration, and at New York University where she studied web design. She has done extensive work in electronic and traditional illustration, creating inclusive designs that include all ages and ethnicities. Her work has appeared in a variety of formats including dozens of books, many editorials, advertisements, and electronic media as well as in games, posters, Gameboy storyboards, background for animations, and even a t-shirt design for the New York City Branch of the Taoist Tai Chi Society. She was an illustrator for the video game “Christina Aguilera: Follow Your Dreams” released in 2000 and created illustrations that appear in the CD-ROM game “Mary Kate and Ashley’s Dance Party of the Century” released in 1999. She creates “realia” which are simulated media found in educational materials and on websites. She directed two editions of Spectrum, which is a series of twelve educational books from the publishing house Simon and Schuster/Pearson Education. Additionally, she has created designs for advertisements for Post Cereals, Children’s Television Workshop, Sports Illustrated Kids, the electronic game creators Hyperspace Cowgirls, Houghton Mifflin, Pearson, Harcourt Brace, Oxford University Press, and Green Mansion Press.

In 2017, Veltfort’s autobiographical graphic novel, Adiós mi Habana was published by Editorial Verbum in Spain, and in 2019 Goodbye, My Havana: The Life and Times of a Gringa in Revolutionary Cuba, was published by Stanford University Press to critical acclaim. The coming-of-age narrative is centered on 16-year-old Connie Veltfort, who fled to the U.S. from postwar Germany with her mother, Lenore. She, her mother, and American stepfather Ted, then relocated to Cuba for a decade, attending high school and university, and where she witnessed the political upheaval and the Cuban missile Crisis in 1962. The novel also importantly tells the story of homophobia and violence against LGBTQ youth in Cuba during the 1960s, where she and others in her community had to conceal their identities. In 1967, Veltfort and her girlfriend were assaulted in Havana on the Malecon, after being identified as lesbians. Through Connie’s eyes, readers see the hypocrisy of the revolutionary spirit and freedom peddled by the new regime on full display. Connie, like many others, is deeply disillusioned by the place she thought to be a potential utopia. Lorissa Rinehart in a review of the book, writes: “In Goodbye, My Havana, the Cuban revolution’s prescribed limits of freedom are most evident in the relegation of women and LGBTQ individuals to the periphery, where their rights quickly erode and their personhood is more easily dismissed.” When asked about what she wishes readers take away from the graphic novel, Veltfort replies: “That Cuba is a heartbreakingly beautiful country, with a rich culture, and a history much more complicated than any tourist or casual academic can see or imagine. That homophobia, an outsized thread in the fabric of Cuban life, was there right from the beginning of the Revolution and it tragically affected the generations that came into the Revolution in 1959, lived through the 1960s and 70s and beyond.” In the same interview with Stanford University Press, Veltfort cites some of her main influences as an illustrator, “Little Nemo” newspaper comic strips by Winsor McCay, the work of Joost Swarte, Dutch graphic artist, and the Pogo books by Walt Kelly. She also noted that her use of color is based on a sense of place and internal situation. For example, she notes that “Cuba is a land of intense color, impossible for me to imagine in anything but full color. I also set out to use color as a visual stand-in for music and sometimes emotions.” Veltfort plans to write another graphic novella in the future about visiting her mother’s family in Germany in 1961.

The finding aid for the Anna Veltfort collection of archives can be accessed here.
You can also visit the archive of Connie's blog "Cuba: el archivo de Connie." 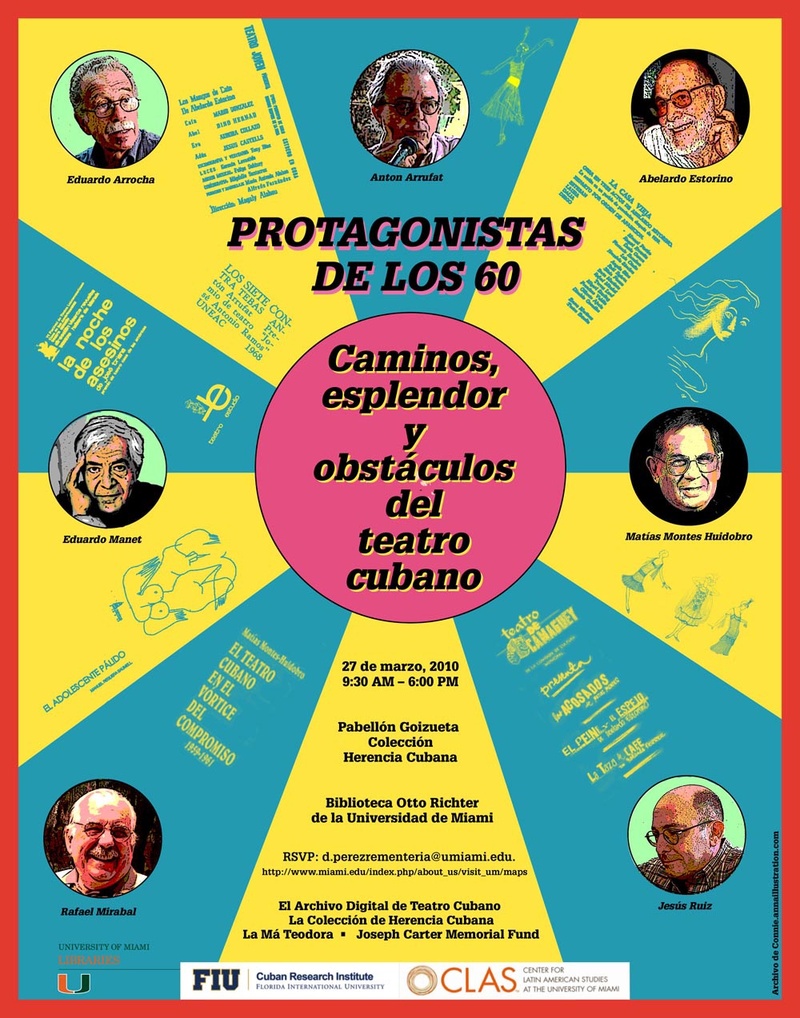 Page from Anna Veltfort's Goodbye, My Havana. The Life and Times of a Gringa in Revolutionary Cuba, Stanford University Press, 2019.
Subject Specialist

Find the Book at UML
Print Book:
Veltfort, Anna. Goodbye, My Havana: The Life and times of a Gringa in Revolutionary Cuba. Stanford, California: Stanford UP, 2019.

"An eyewitness account of idealism, self-discovery, and loss under one of the 20th century's most repressive political regimes.

Set against a backdrop of world-changing events during the headiest years of the Cuban Revolution, Goodbye, My Havana follows young Connie Veltfort as her once relatively privileged life among a community of anti-imperialist expatriates turns to progressive disillusionment and heartbreak. The consolidation of Castro's position brings violence, cruelty, and betrayal to Connie's doorstep. And the crackdown that ultimately forces her family and others to flee for their lives includes homosexuals among its targets—Connie's coming-of-age story is one also about the dangers of coming out. Looking back with a mixture of hardheaded clarity and tenderness at her alter ego and a forgotten era, with this gripping graphic memoir Anna Veltfort takes leave of the past even as she brings neglected moments of the Cold War into the present."
Stanford University Press, 2019

Publishers Weekly
"…. Among often partisan portrayals of Cuba, Veltfort’s memoir of a rare life’s triumphs and tragedies stands out for its nuanced portrayal."(Sept.)

Elizabeth Mirabal (2018) Review of Adiós mi Habana, NACLA Report on the Americas, 50:1, 101-105.
"Connie begins the story feeling foreign, but by the end finds a new identity of a person who faces the same tribulations Cubans face."

Rinehart, Lorissa. "A Graphic Novel Looks at the Limits of Freedom in Revolutionary Cuba", Hyperallergic, September 16, 2019.

“Can We Still Be Revolutionaries?” Anna Veltfort is Interviewed by Ted Henken for No Country Magazine, February 26, 2021.

"In this exclusive interview with Ted Henken, New York graphic artist, blogger, and one-time habanera Anna Veltfort shares the contents of her “Cuban Cold War closet,” revealing long-held secrets from the decade she and her family spent in Cuba during the Revolution’s honeymoon years. For her, and for many other young gay artists of her generation, these were both tough and luminous years filled with illusions, idealism, and unforgettable events, both exhilarating and terrifying."

Fox, Lorna Scott. Childless Mother of Them All: Feminism and Revolutionary Cuba., Times Literary Supplement, May 1, 2020.

"Through the format of the graphic novel, Anna Veltfort offers a glimpse into a chapter of Cuban history that has never been told before. Adios mi Habana recounts the years Anna and her family spent in Cuba during the 1960s and early 1970s. She quickly perceived that daily life for ordinary Cubans bore little resemblance to the privileged circumstances of their family as "foreign technicians." She discovered history, received an education, enjoyed and suffered "mass activities," working in agriculture and participating in research conducted by the University of Havana in the Sierra Maestra Mountains. She also experienced gay paranoia and repression as she explored and defined her sexual identity by coming out as a lesbian during the time of the cruel homophobic purges that swept Cuban society."