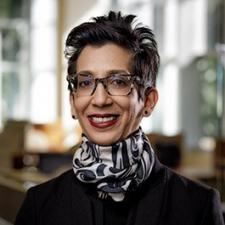 Dr. Elizabeth Cerejido’ s professional and academic work has focused on Cuba and the Cuban diaspora.  Her scholarly interest in these communities has been implicit in her work as a museum curator, educator, scholar and administrator.  In all these roles, the lens of visual arts has been critical to her exploration of Cuban and Cuban diasporic cultural production in the post-revolutionary period.

Elizabeth has taught at the university level in a number of institutions; her most recent course was entitled Cuba: Society in Transition which she co-taught with Rachel Weiss in Cuba for the School of the Art Institute of Chicago.  Elizabeth’s curatorial work entailed creation of exhibits and public programming for the Patricia and Phillip Art Museum at Florida International University, and later at the Museum of Fine Arts in Houston, where she served as Assistant Curator of Latin American and Latino Art.  The exhibition and public programming she developed at FIU invited several well-known Cuban and Cuban-American artists to present significant projects in Miami for the first time.  Her post-graduate research interests are reflected in her numerous publications. A recent example is “Museum as Battleground: Exile and the Contested Representation of Culture in Miami’s Cuban Museum (1972-1996)”, a chapter in Art Museums of Latin America: Structuring Representation, published by Routledge in March, 2018.

Before joining the Cuban Heritage Collection, Elizabeth took on innovative leadership roles within the Miami arts community as independent curator and researcher for projects developed for the CINTAS Foundation, the Pérez Art Museum Miami, the Cuban Heritage Collection, and the Cuban Research Institute at FIU. In 2014, she received a Knight Foundations Arts Challenge grant for her project, "Dialogues in Cuban Art" that brought together Cuban and Cuban-American artists and curators through cultural exchanges, symposia and exhibitions in both Miami and Havana. Cerejido recently curated the exhibition "Radical Conventions: Cuban American Art from the 1980s" a collaboration between the CHC and the Lowe Art Museum, with an accompanying catalog.

Elizabeth received her PhD in Art History from the University of Florida in Gainesville. She earned her Bachelor of Arts in art history at Florida International University and her Masters of Arts in Latin American Studies at University of Miami.