Do you read comics?  How about romances? Historical fiction? Nonfiction?  Chances are, you’ve read a book that’s been banned!  Writers of every race, religion, and gender identity have had their books, comics, short stories and more banned because their ideas were deemed too dangerous for the public.  Books are being banned from libraries in the United States and abroad every year.  According to the 2022 State of America's Libraries Report,  record-breaking 729 challenges to 1,597 books in libraries across the country for a variety of reasons, most notably for content related to LGBTQAI+ rights or for addressing issues of race and racism.  Find out more about which of your favorite books or comics were banned or challenged in the last year.  Get involved!

Use the search box below to find banned books in our catalog!  Select ‘Subject’ from the drop down menu and search for ‘banned books’.  Our list keeps growing every day, so check back often!
Search for Banned Books! 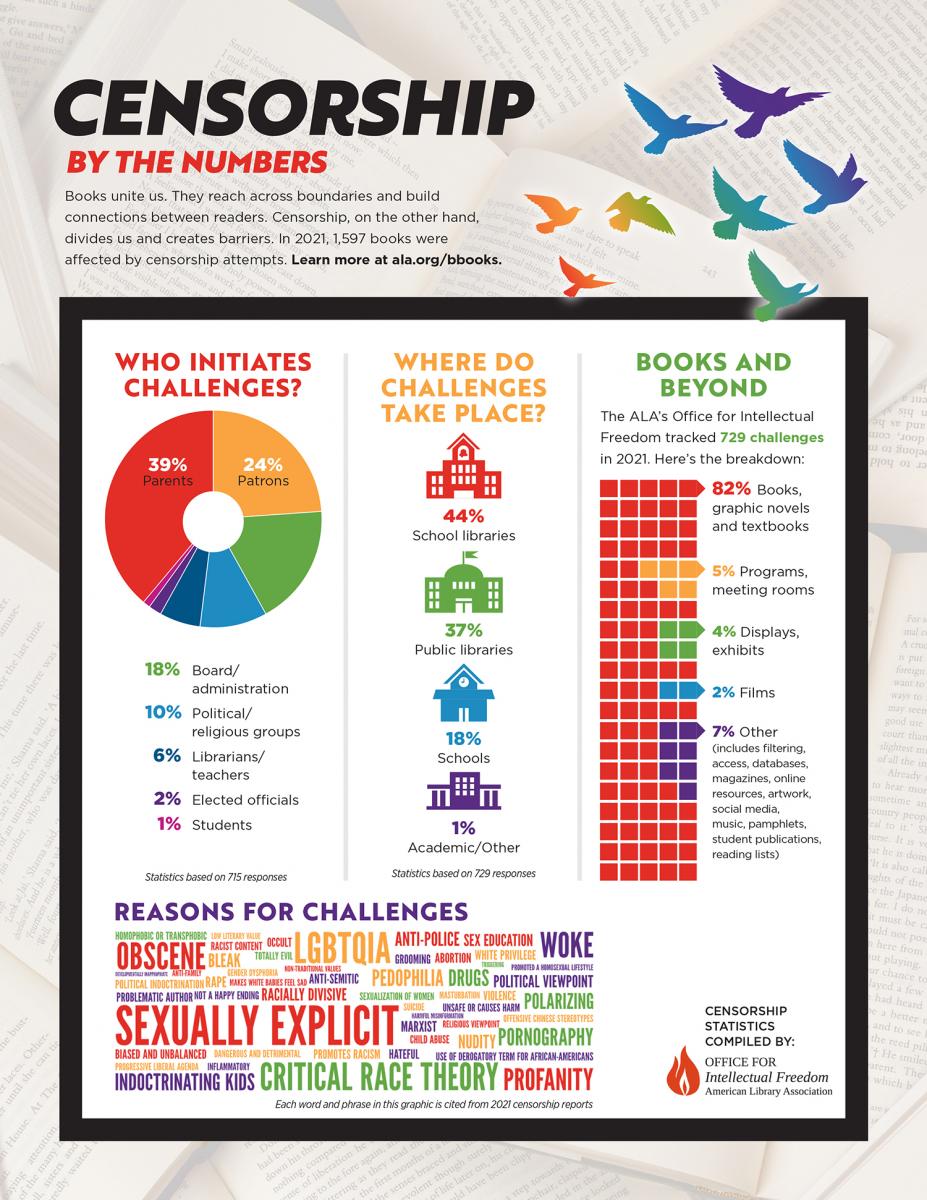 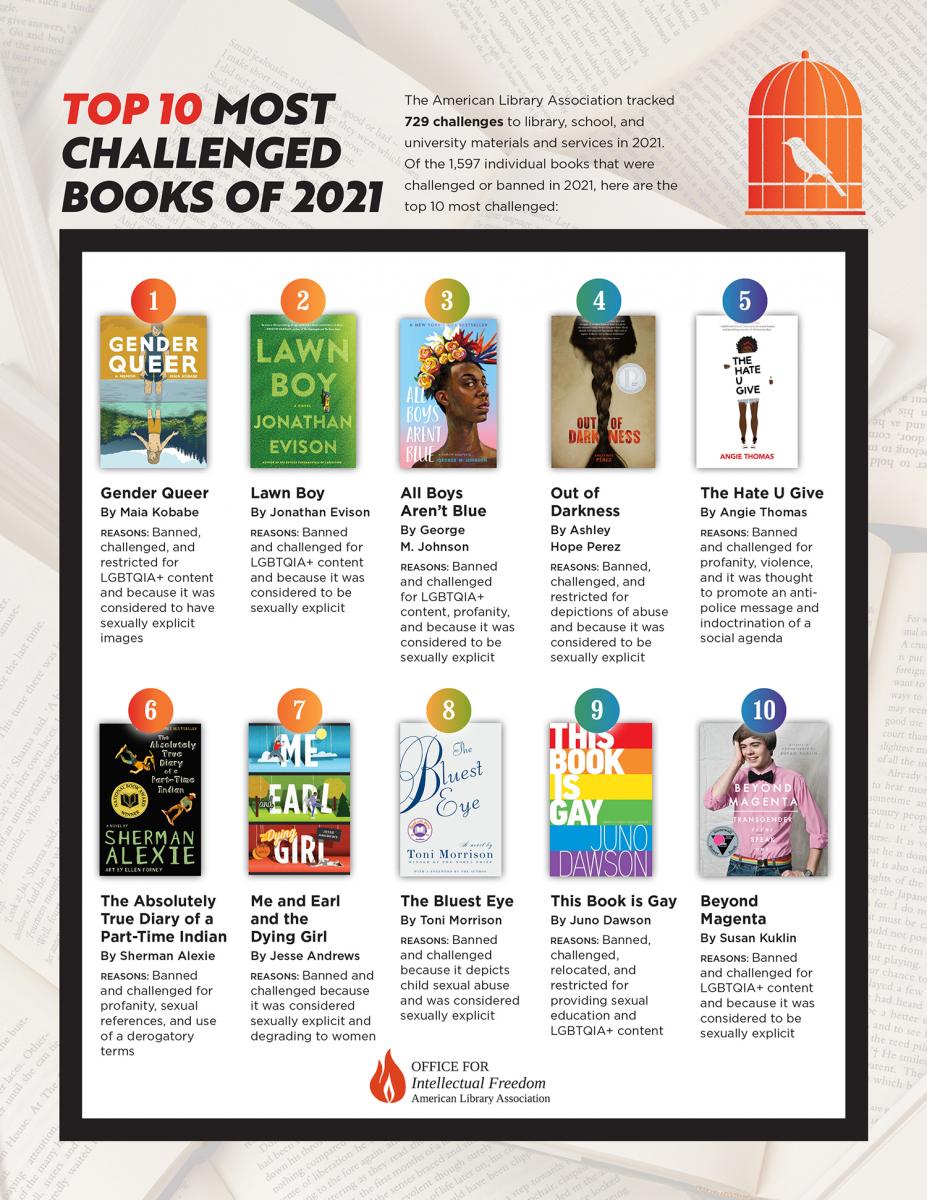 Every year during the last week of September, libraries, schools, bookstores, museums, and other places around the world organize in celebration of Banned Books Week. Launched in 1982, Banned Books Week was established in response to a rapid surge in book challenges across American academic institutions.
Taking place September 18th through September 24th, Banned Books Week 2022 calls us to reflect on the violent dangers of censorship, and to acknowledge the importance of libraries in maintaining access to all narratives and ideas—even those considered controversial.
During the week, libraries across the country celebrate the freedom to read while calling attention to continued efforts to ban books that feature the stories of people whose identities and viewpoints have traditionally been underrepresented, such as immigrants, refugees, people of color, LGBTQ+ individuals, or persons with disabilities.
Over this past year, libraries have found themselves at the center of a culture war. As conservative groups lead historic efforts to challenge and ban academic materials that address racism, gender, politics, and sexual identity, libraries are being called to fight against censorship efforts in unprecedented waves.
This call is not entirely new. Librarians have always been on the front lines of the fight to defend the right to read. However, 2021 saw a record-breaking increase in the number of books being challenged, banned, or suppressed. The American Library Association’s (ALA) Office for Intellectual Freedom, which tracks book challenges and releases the “Top 10 Most Challenged Books” list each year, counted 729 challenges to library, school, and university materials in 2021. This figure is a significant jump from previous years where the group noted 156 challenges in 2020 and 377 challenge cases in 2019. Since many of these challenge cases involved multiple book titles, 1,597 distinct books were contested in 2021.

Why are books challenged?
Oftentimes, book challenges are motivated by a desire to protect children from “inappropriate” content or “offensive” language. The following were the top three reasons cited for challenging materials as reported to the Office of Intellectual Freedom: 1.)  the materials were considered "sexually explicit”, 2.)  the material contained "offensive language”, 3.)  the materials were considered "unsuited to any age group"
When concerned individuals object to the availability of certain books in a school or library, they present a complaint to the school board or library administration, calling for the removal of any materials deemed offensive. These challenges are then reviewed by the appropriate administration. If the verdict requires the challenged book to be relocated or removed from public access entirely, then the book is considered banned
In Florida, a majority of the books challenged and subsequently banned have been books that touch on race (How to be Anti-Racist by: Ibram X. Kendi), Sexuality (Lawn Boy by: Jonathan Evison) and gender identity (Gender Queer: A Memoir by: Maia Kobabe). Notably in Florida, these challenges also coincide with the state legislatures passing of the Stop WOKE Act (HB 7) which prohibits the teaching of Critical Race Theory in schools, and the “Don’t Say Gay” bill (HB 1557) which bans the teaching and discussion of topics relating to gender and sexual orientation for many young students. Book challenges are about more than just one person or group expressing an opinion about a particular title or author; they serve as an attempt to limit access to specific points of views.
Books have always served as a way for readers to build connections and expand their worldview. The act of engaging with stories that extend beyond our own lived experiences is unifying; censorship, on the other hand, divides and creates barriers. For the full list of this years banned books list and their reasons for being banned, please visit the ALA’s “Top 10 most Challenged Books” list.

Banned Books Week at the University of Miami
Come join us in September for a week-long celebration of free speech and great literature! Starting September 18th, look around the library for books that have been challenged or banned – some of the titles may surprise you.
Want to know more? Check out our Banned Books Week Guide and learn more about what happens when a book is challenged.

Exercise your right to read – check out a banned book from the library!

With Rising Book Bans, Librarians Have Come Under Attack
https://www.nytimes.com/2022/07/06/books/book-ban-librarians.html

All 200+ Books Banned in Florida and What Miami Booksellers Have to Say About It
April 18, 2022
https://www.miaminewtimes.com/news/miami-bookstores-react-to-floridas-banned-books-14296052?fbclid=IwAR1b5wihkudeIFlqxtbA9e76pryTRrjHOmd8gFcv3d5jNxeVmGOb1Vc4RYU

NYC libraries are offering free digital library cards to people across the U.S. : The offer is being done in response to book bans that have cropped up around the country.
April 13, 2022
https://www.timeout.com/newyork/news/nyc-libraries-are-offering-free-digital-library-cards-to-people-across-the-u-s-041322?fbclid=IwAR0Pnj8LLNb3DsMpZR--YO6DZO-OQ_wN_KVUHF19CXSe5479IEEnjcfMZBU

What Students Are Saying About Banning Books From School Libraries: Teenagers share their nuanced views on the various book banning efforts spreading across the country.
February 18, 2022
https://www.nytimes.com/2022/02/18/learning/students-book-bans.html

How the new banned books panic fits into America’s history of school censorship: What’s at stake? Who gets to control the story of America.
February 17, 2022
https://www.vox.com/culture/22918344/banned-books-history-maus-school-censorship-texas-harold-rugg-beloved-huck-finn-dr-seuss

‘Adults are banning books, but they’re not asking our opinions’: meet the teens of the Banned Book Club
February 7, 2022
https://www.theguardian.com/us-news/2022/feb/07/banned-book-club-pennsylvania-animal-farm

So You Want to Support Your Library? School and Public Libraries Need Your Support in a Wave of Book Banning
February 7, 2022
https://teenlibrariantoolbox.com/2022/02/07/so-you-want-to-support-your-library-school-and-public-libraries-need-your-support-in-a-wave-of-book-banning/

Banned: Books on race and sexuality are disappearing from Texas schools in record numbers
February 1, 2022
https://www.nbcnews.com/news/us-news/texas-books-race-sexuality-schools-rcna13886

Robbins, Louise S. The Dismissal of Miss Ruth Brown: Civil Rights, Censorship, and the American Library. Norman: U of Oklahoma, 2000.

Read up on censorship in libraries!